So you’re new to the mountains. You’ve read the books, you’ve gotten stoked, you’ve taken a pretty good class, and you’ve got some skills. You’re proud of yourself, and you should be. Congratulations. Now you can really kill yourself.

Your muscles are strong, and the places they can take you are thrilling, sublime, and indescribable. You try to tell your friends all about it, but, for the most part, they don’t get it. They all agree that your stories and photos are amazing, because they are. Then they ask about the risk; Is it safe? Maybe you get very sober, maybe you’re a ball of unstoppable enthusiasm, but either way, you tell your friends and family: I understand the risk, and it’s worth “it”.

I’m writing this because, when I was in that very spot, I didn’t know. I had no idea. I thought I did understand the consequences. I’m writing this now because 35 hours ago, a second friend, a much closer friend this time, fell through a cornice on a beautiful moderate-hazard day, took a long trip through the air, died of blunt force trauma, and triggered an avalanche. “It” really sucks.

I first experienced “It” on Memorial Day Weekend of 2009. My ski partner, Will, and I had skied from the summit of Mt. Rainier too late in the afternoon, and we, myself in particular, were totally exhausted. The ski of the Fuhrer Finger was wonderful. On the easier ski down the Wilson Glacier, a locked binding, a heavy pack, skinny skis, and knee-deep sloppy snow helped me to break my ankle. Two pops, one bone and one tendon, and my foot pointed outward at a 90-degree angle. Through heroic efforts of the Mount Rainier Climbing Rangers and the excellent work of the medical students at UW Harborview, I have few residual effects of that injury.

That accident, surgery, bedrest, and crutching, opened my eyes to a whole new idea. It wasn’t just possible to die in the mountains, a little mistake followed by darkness, but it was possible to be permanently crippled in the mountains. If you’re a selfish soloist, asking “am I willing to be crippled over this?”, as you mull something dangerous, may induce caution.

The depth of “It” made itself known when I started dating a new friend. Less than a year before, her climbing partner was killed in a rope-team fall on an icy glacier. Lee was a strong climber, and had a great joy for life in the mountains. His self-arrest of his rope team was, by all accounts, textbook quality, and is thought to have saved the lives of his partners as he slowed their descent into a crevasse. It wasn’t fair — the long track of his ax pick extended all the way to the lip of the crevasse. All that I know about him comes from the words and voices of others, but I know I missed out on meeting a great man.

“It” got real for me on February 1, 2011, when an acquaintance, skiing alone at Snoqualmie Pass, summitted Red Mountain, took off her pack, helmet, and skis, set them down, and took a few steps closer to the steep North Face. The corniced snow beneath her feet failed, and she fell hundreds of feet to her death. The cornicefall triggered an avalanche, burying her body.

One of her friends summitted Red the following day, finding gear that could only be Monika’s, and called for rescue. Susan and I were at the pass that night for ski lessons, had heard that Monika was missing, and could see the beams of searchers’ bright headlamps high in Commonwealth Basin. Chatting with the SAR commander, there was no way we could help with the rescue plan, and I hadn’t brought climbing skins. We spent the cold night in a cabin at the pass; knowing that Monika might be out there, alive but cold and broken, was terrible.

Monika was one of the strongest and kindest backcountry skiers anyone knew. I’d taken a class in which she was an instructor, and had shared an early ski morning before class on an overnight at Paradise. That the death of someone I barely knew could reduce me to racking tears was a revelation. The whole community mourned, even before her body was found.

Monika’s partner was strong. As her car sat unmoved in the parking lot, he searched, with both SAR and with friends, every day for her until she was found. He was with the party that did find her, four days after the accident. Strong he is, and remains, but the loss wounded him deeply.

“It” came back again this week.

Franklin was a ball of endless energy, always doing something. If he wasn’t at work, he was in the mountains or on the way there. He definitely wasn’t asleep; we’re not sure he ever did. He was competent and capable. I still can’t fathom that we won’t see him again, but I’m starting to accept that it’s true.

On another beautiful low/moderate-avalanche hazard day in the Cascades, just like Monika’s accident, Franklin walked a little closer to the edge of a ridgetop than he and his partner had on the way up. The corniced snow failed, and he took a long fall, falling almost half a vertical mile,  in an avalanche much of the way. The reports claim that he probably didn’t suffer; for that we can be thankful.

As is perhaps common, we’re all realizing that we loved him even more than we knew.

There are innumerable ways to get hurt or die in the mountains. Don’t rush in until you know into what you’re getting. The mountains will be there next year.

So, to you, new mountain-person, I urge you to aspire to the following goals:

1. Don’t die in the mountains before someone you know does. You won’t know what you’re risking until it happens.

People you know are going to die in the land of indescribable beauty and experience. When they do, it will hurt.

Another friend lost, our strong, deliberate, skillful, and quiet Laurel, July 2016, from the perspective of a younger climber:

Other perspectives on mountain risk and loss:

Yesterday, on the first day of Summer since the accident, Franklin’s closest climbing partner became the ninth woman to summit Washington’s highest hundred peaks (Bulger list). She’d saved humble and stalwart Adams for last, setting up the conditions for an unstoppable alpine party. Franklin’s name came up only once, when she asked, “Do you know where the true summit is? Franklin said that almost everyone goes to a false summit.” We knew, and we went, following Franklin’s remark the hundred or so steps northeast to the subtle bump where, in late summer, a little hump of gravel comes to the surface. I wanted to say more, to bring back the infectious joy that he’d have radiated at Carla’s grand success that they’d worked so hard to share, but I fear that the loss is still too near for us all.

The mountain was kind to us yesterday; the weather was superlative, the friends copious and kind, and every route was in great condition. As we skied from the summit, behind us, a hiker proposed to his companion.

We miss you, Franklin. 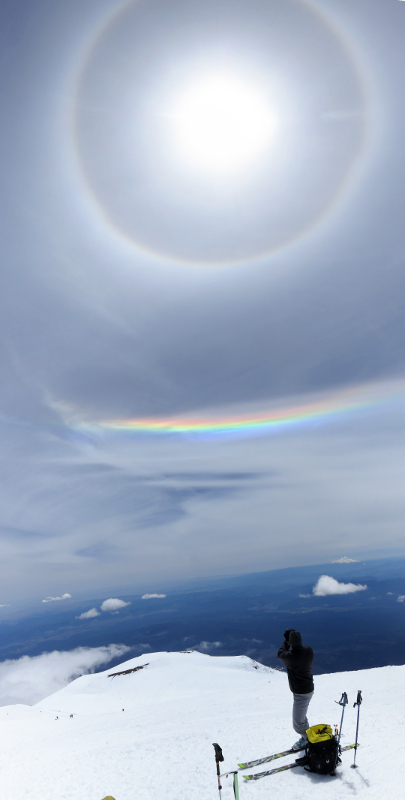 To underscore the message of this essay yet again: as we climbed yesterday, one of our party got the sad news that Karen Sykes, missing and overdue on a hike for more than half a week, had been found. Everyone knows everyone else in our little world. The coroner’s report placed the cause of death as hypothermia, but public details are slim. She was a prolific writer of trip reports, spreading a gospel of hiking and exploration long before the internet made such things easy. She wrote for the Seattle PI, where I may have first encountered her stories, one of which later led me up to Hidden Lake and another which still calls me to Desolation Lookout. Her printed guide to lost trails was a housewarming gift from my mother as I started my first quarter at UW. Karen advocated safety, and kept her printed goals modest, but never mild. She was 70, hiking out a little beyond where her partner had decided to call it a day.

You can find a sampling of her wonderful routes here.

5 thoughts on ““It”: thoughts for a new mountaineer”