A great deal on a pair of Drifts appeared on our local gear swap today, and I couldn’t pass it up. A friend’s pair of 165 cm Kilowatts is nearing the end of its service life, and the Drifts may be a partial replacement.

Weight-wise, the skis aren’t mint. The previous owner has drilled them once for Dynafits, and added tip/tail rescue holes. That said, these skis weighed exactly the same on my scale; we’ll call them 1464±1 grams.

I can’t find an official BD spec from the 11/12 season, Backcountry.com (archive.org) claimed 1561 g/ski, which matches a blem spec at GearX. For the 12/13 model year (different graphics), the claim was 1432 g/ski.  These skis are very consistent in weight, and 6% lighter than the original spec, far more than can be explained by the drilled holes. 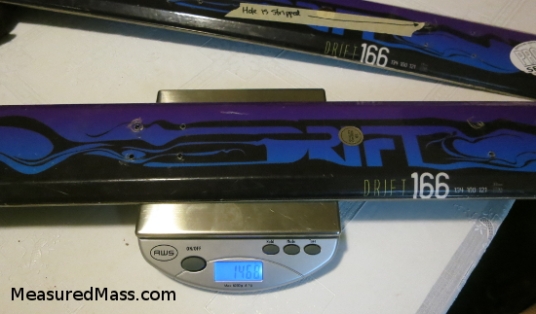