We were placing practice beacons for a backcountry ski/avalanche course last Saturday, when I heard a quiet ‘pop’. Susan looked up and said, “My shovel broke.” “What?” “Look, it broke!”

This is not a post intended to slag the manufacturer. Susan and I both have one of these shovels, and have gotten many years of use out of them. They’re light and strong-enough to get the job done. Furthermore, the manufacturer has, in response to industry-wide durability concerns, changed their manufacturing process to address stress risers in exactly the place that this shovel broke. 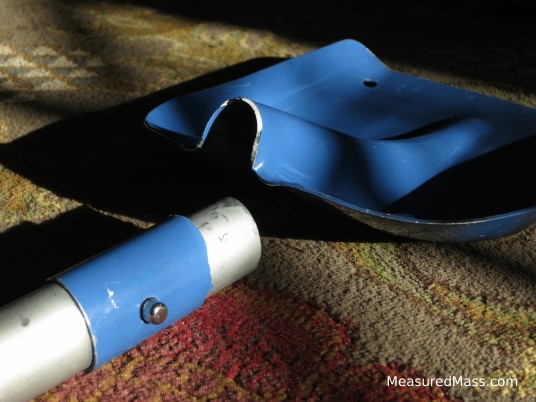 I’d already retired my blue shovel as, while excavating a high-centered car in 2009, I’d heard a disturbing crackling sound from the shovel blade where it met the handle. After a few more trips, I wasn’t willing to bring it with me anymore. A comprehensive European survey of avalanche rescue shovels had just come out, and very few of the shovels available on the market passed. I paid the weight penalty and bought one of the only winners (thank you, Voile!). We’d taken these shovels everywhere, and relied upon them for life safety. To have this shovel break on a lazy day of instruction, five minutes’ walk from the car, was a blessing.

This post is about reality. A shovel is one of those things whose reliability we rarely consider. It’s a multipurpose tool, it gets used for snowpits, snowcaves, burying the latrine, chopping out a place to sleep, keeping a stove off the snow, getting water, unburying a car, paddling down rivers, and more. It’s always there, and they rarely fail. Much of the time, however, we don’t bring our shovels along with us for those tasks. We bring shovels because there’s a tiny chance on any given trip that we’re going to need to move more than a metric ton of snow in a minute to prevent a partner from suffocating. If the shovel breaks, we’ll be too slow getting to them.

So, every once in a while, take a moment to reflect on your gear. What parts are getting old, getting fatigued, or just aren’t quite up to snuff? It’s a good idea to work with an old and trusted tool, but sometimes it’s too old and worn to be trusted. Metals work-harden, and there are lots of interesting ways that metals can fail over time (see Stress Corrosion Cracking, for example). Plastics age, both in the sun and weather and over time; as plastics age, they become brittle. When I was an avid whitewater kayaker with a university outing club, we annually tested helmets for brittleness by squeezing the ears of helmets. If there was a crackling sound, then a hard throw at a concrete floor could reliably shatter the helmet into an explosion of small pieces. We rarely had helmets make it more than 5-6 years before brittleness led to retirement.

In the specific case of shovels, keep an informal log of use in your head. If you’ve spent a lot of time using your shovel hard, especially prying with it and stepping atop the blade (neither are recommended by shovel gurus), it might be time to retire it. Manufacturers: please give us guidance on the number of days of use we should expect shovels to last, along with a description of the shovel’s expected use and limitations. Nobody, manufacturer, rescuer, or victim, wants to be surprised by a broken shovel.