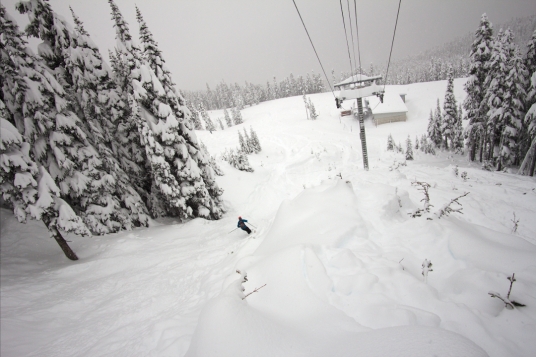 We skied this Thanksgiving, as we did last year, in Canada. It snows there, you see, and it does so earlier there than it does here in the states.

Holy moly, did it ever snow this year. It snowed enough to open Whistler early, and then it snowed a lot more.

We got up there Friday morning, and found ourselves waiting in impressive lift lines. More than an hour after entering our first line, we got to ski. It was clear that the snow was drier and deeper than we’d thought; two lifts later, it was much deeper than we thought, and the hunt was on.

If you ski for powder, the hunt needs no explanation. If you don’t ski, let me explain. The ski-area powder hunt has a rhythm.

First, if the snow is good, and you’re early, and you see large steeper swaths of untracked snow near the lift, you ski it. No questions.

As people arrive, and the trivially-accessed snow gets skied, you move to the margins of the runs, or begin to look for ideas other people haven’t yet tried. If you find more untracked snow, you hit it as many times as you can before others figure it out. Skiers leave tracks, and tracks are eventually followed. Don’t think; Ski. If you stumble onto something better, hit that instead.

Eventually, once you’ve gorged on the main courses, it’s time to hunt for neglected delicacies and hard-to-reach ski lines. Everything you’ve learned from your gluttony will help. Where was the snow good? How did the winds move snow? Should we hunt in the trees?

Sometimes, the music will change; a new time signature will appear, perhaps a ski lift or gate opening to the public, and the dance begins anew.

The word “safety” has not yet appeared.

Friday was good, save the hour we got separated by miscommunication on the last run of the day, one of us worriedly skinning uphill to check tree wells, the other waiting worriedly at the base of the run and chatting with patrol.

Saturday was a ski day to remember.

The weather forecast was the best kind of wrong. Low winds and copious snow made the pricey lift pass a no-brainer. We unexpectedly saw American friends in the gondola line, a few cabins ahead of us. On the ride up, a skier arced by. His lower legs were invisible, hidden by light snow flowing around them; a good sign. Still unfamiliar with the area, we agreed on a plan: Ski the runs that skied best yesterday.

We reached the top, clicked into our skis, and plan became action. Hunters.

The run reaches a level spot and forks. Everyone’s going right, where a slope continues downhill, but a skier in blue pants is forcing his way leftward through deep snow on the flats. People that do this are either wise or crazy. A glance at a left-arrow sign answers the question. He’s probably wise — the left-hand run is marked with the blue square of “intermediate”. Steeper. Genius. Our momentum down his track lets us help him reach the rollover into the slope below. Empty, untracked, and steeper. It’s on.

Blue-pants turns out to be one of our friends from the gondola line. We join forces. They know the ski area well, so we’re thankful to tag along as they show us their hunting ritual.

A couple hours later, we’re beginning to pick the bones. We notice that the previously-closed Crystal Ridge lift has opened just as we step onto a gondola which will take us in the wrong direction. The hunt’s time signature has changed, we’re not sure by how much. An hour is consumed working our way to Crystal Ridge. Reaching the bottom of the lift, the snow is tracked up, already pillaged by hunters; our hopes aren’t high. Under the lift as we rise, skiers are looking for a missing ski in the middle of a run, a good sign. At the top, we’re still unconvinced, but we’ll give it a shot. A crazy/wise skier opened a new line that looked fun. We try it.

It’s knee-deep, but awkward, as crazy/wise routes can be. We land in an untracked beginner run. Fun begins. It’s flat, but pitched just enough to ski. As I ski, I feel the support drop from beneath me — a surprise. This run hasn’t yet been skied this season. It’s a meter or two of pure fluff. A moment later, one of us, an excellent skier, has the same surprise, loses a ski, and lands in the snow. All we see is his head. His ski is gone, consumed. Three of us help him get upright, locate the ski a meter beneath the surface, and we’re off again. The slope steepens again, and it’s good.

I make the single deepest turn of my life. Paradoxically, it’s not a turn. My skis are straight down the fall-line, it’s an intermediate run, and the snow flows far overhead. Blind. My partners above thought I’d disappeared entirely, perhaps into a creek, until I reappeared, travelling fast. Oh. We are doing this again. Steeper. Those steep expert runs at the left margin of the map? Yes.

There’s no question that we’re heading back up the lift. Our excitement rises further when we see short lift lines. Wait. Are people leaving the lift line? There’s nobody on the chairs? They’re closing the lift? But why?!

This, my friends, is why I’ve written so much. We won’t find out until the evening, snug in bed, that a snowboarder had passed away perhaps an hour and a half before the chair was closed. He was pronounced dead at about the time of the lift closure. Our next run would have passed within 1-200m of his spot. It is likely that he asphyxiated in the deep snow. There was no avalanche.

If these ski runs were in the backcountry, we would have applied a regimented approach to our safety. We probably wouldn’t have talked about any other subject more. With the burden of snow safety mostly shouldered by ski patrol, and the pressure of tens of thousands (!) of people seeking the same snow we were, our decision-making was focused upon finding the best snow. The shapes of our turns were made for speed, to gobble it all before someone else did.

Deep powder wasn’t meant to be skied en masse 1. Deep snow requires care and deliberation, not just for safety, but to be able to revel in the moments it can create. Ski deep snow with a partner. Soak it in.

It’s hard to know how many people had their ‘best day ever’ on Saturday, but I’d venture hundreds of people. As one forum poster wrote about the weekend: “Genuine touching the face of a higher power kind of moments.” Was it worth the life of a 27-year-old? It’s not for me to say.

In part to avoid the frenzy, we cross-country skied Sunday. The deep snows, relaxed smiles of parents and kids, and snow-clad forests of the Callaghan Valley seemed closer to the soul of why I ski than Saturday’s frenzied hunt2.

2. To ground my safety-minded talk, I tripped over a skate ski and torqued my shoulder on a flat groomer Sunday morning. Can’t do that in five feet of powder.